The world doesn’t seem a very friendly place sometimes, so it’s more important than ever before that we teach kids the value of empathy – of seeing the world from other points of view. Before, we’ve touched on how fairy tales can help children with difficult emotions, but in this blog, our focus is on how you use fairy tales to help build empathy and help children to develop compassion, kindness and understanding. Something we could all benefit from right now! 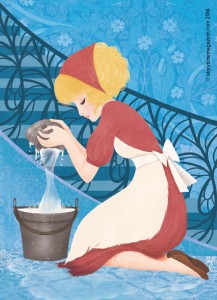 Ask: How did Cinderella feel?

1. Cinderella and the Jealous Bullies

Some fairy tales have been told and retold so often, they lose their shine. At least this is how Cinderella felt for me for a long time, but as we retold it for Storytime (back in Issue 3), I was reminded of why this fairy tale is so enduring popular. More than anything, I was struck by how Cinderella is a tale of hope and escapism for the persecuted and downtrodden. For that reason, it is a great tale to help you start a conversation about bullies and the bullied and why bullying is wrong. How did Cinderella feel when her stepmother and stepsisters were so cruel to her? Can you write a list of her feelings? What would you have done if you were her? Why did the stepmother and stepsisters bully Cinderella? Can you imagine what they were feeling? (Here, you can talk about jealousy, why they feel jealous and why it’s a negative emotion.) Don’t forget that before poor Cinderella is bullied, she also loses her mother and father, so this is also a useful story for discussing and understanding feelings of loss, grief and loneliness. This is one of the best fairy tales to help build empathy.

2. Three Bears and the Careless Intruder

I’ve mentioned before Goldilocks’ rebellious behaviour (she’s not your typical fairytale heroine), and she’s certainly an interesting character to try to empathise with. How did she feel when she went into the bears’ house? Was she guilty or sorry that she ate the porridge and broke the chair? How did she feel when she woke to find the three bears surrounding her? Why didn’t she apologise? Is she thoughtless or frightened? Is she looking after herself or terribly embarrassed? It’s also interesting viewing the story through the eyes of Baby Bear. How did he feel about his favourite chair being broken? Imagine it was your favourite toy – how would you feel? Did he feel better or worse after Goldilocks ran away? Often in childhood, one child will accidentally break the toy of another child. In an ideal world, there’ll be apologies and cuddles to ease the sadness and tears, but life isn’t always like that. Baby Bear’s tale is a good lesson in emotional resilience. Goldilocks appeared in our very first issue and appears again in Issue 49. 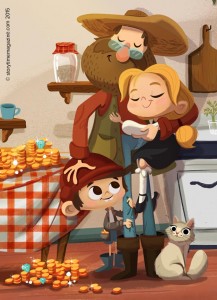 Hansel and Gretel: a tale of forgiveness

3. Hansel, Gretel and the Untrustworthy Adults

On the subject of teaching emotional resilience and forgiveness, it’s hard to find a better fairy tale to explore than Hansel and Gretel. Their stepmother instigates dreadful cruelty, but their henpecked father betrays them horribly too. When talking about this story, you can try to imagine how Hansel and Gretel feel at various points in the story:

How did they feel about him after everything they had been through? Happy? Angry? Sad? How did they feel about the adults they trusted – the stepmother, the father and then the witch? Now try to think about the events from the point of view of the father. How did he feel as the story unfolded? What were his fears? What or who did he care about most at the beginning and the end of the story? Should Hansel and Gretel forgive him? Who do you feel most empathy for in the story?

4. The Frog Prince and the Pitiless Princess

I’ve discussed this rebel princess before but, if ever there was a tale about being kind and accepting difference, this is it. The princess goes back on her promise to the frog. Why did she do that? Was it right? How did she feel? How did that make the frog feel? Then she is forced to dine and sleep with the frog that she finds so alien and revolting. The princess in this story is too selfish to consider the frog’s feelings and focuses only on herself. What if the princess had been more sympathetic? How would that have changed the story? How about trying to tell the story from the frog’s perspective instead? Or imagine the frog as a person from a different country who speaks a different language. Would the princess have behaved the same way? Can you draw any parallels to real life? How should she have behaved? (You can get our Frog Prince issue in our back issue shop.)

Yes, at their most basic, fairy tales can teach lessons about right and wrong, problem-solving and overcoming fears, but with a little more exploration and the right questions, they can be a springboard for understanding emotions and even helping the next generation grow up to be kinder and more empathic human beings – people who can relate to others and find likenesses instead of differences. Now wouldn’t that be a happy ending?

Let us know if you have any good examples of stories or fairy tales to help build empathy – and whether you’ve used them successfully. We’re always very happy to hear from you!