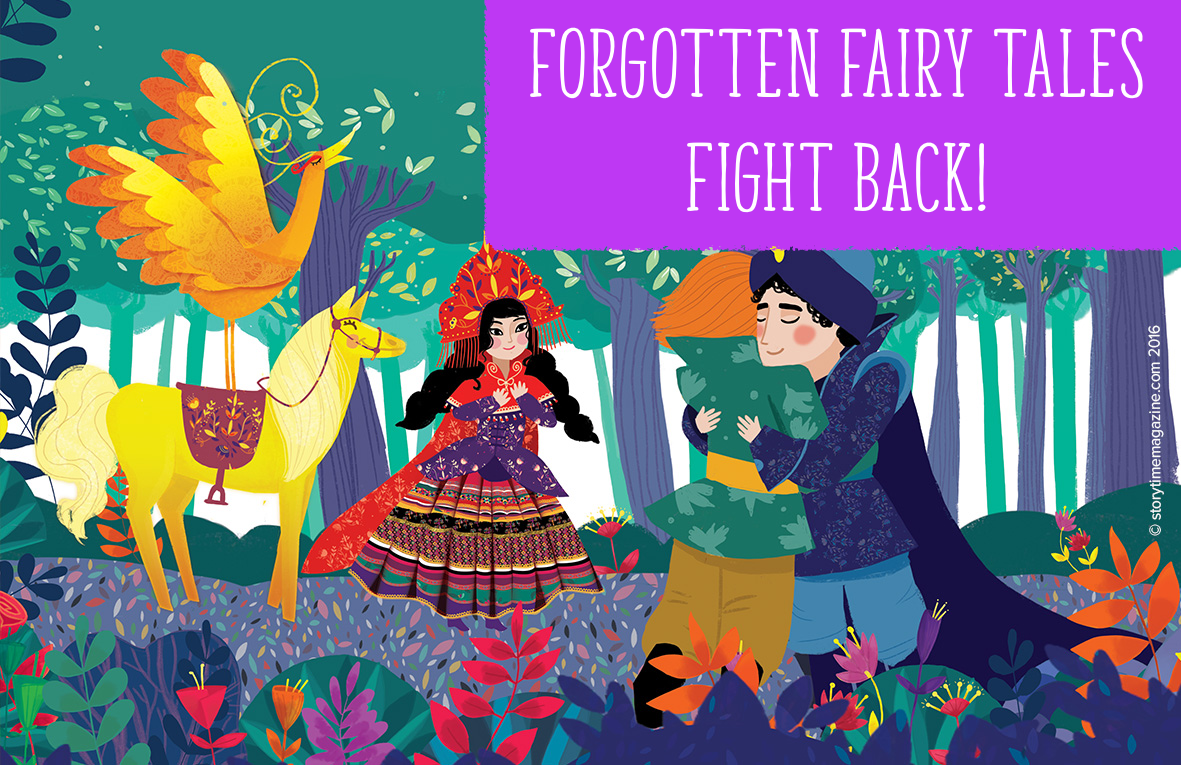 Here’s a confession: I’m no great lover of famous fairy tales. I’ve heard or read them all so many times that I have famous fairy tale fatigue. Cinderella, Rapunzel, Sleeping Beauty, Goldilocks and co… I understand why they’re so enduringly popular and I appreciate the important role they play in family storytimes and encouraging reading for pleasure, but they’ve lost their sparkle for me.

Of course, we included them in Storytime because, frankly, it would be rude not to. More importantly, it was what our readers wanted, and feedback from our readers is a great motivating force for Storytime. I’m sure, for the same reason, almost every children’s book publisher has issued its own versions (classic, revamped, fractured or funny) of the world’s favourite fairy tales.

But here’s the thing – we’re caught in a ridiculous loop and, if we don’t do something about it soon, we’re going to lock the library door and throw away the key on hundreds (perhaps thousands?) of forgotten fairy tales. Fantastical stories from diverse cultures will be lost to future generations, never to be read or told again. Even some fairy tales from better known authors, such as the Brothers Grimm, are rarely or never published. All because Cinderella, her great clod-hopping glass slippers, and a dozen or so other stories are trampling all over them. Is that what we want – the same handful of fairy tales told over and over again?

A State of Fairy Tale Emergency

Is it all Walt Disney’s fault? Perhaps, but now’s the time to change the future of fairy tales, rather than dwell on their past. So I declare us all in a state of fairy tale emergency and, at Storytime, we’re more than happy to take action. We’re planning future issues right now which feature more wonderful forgotten fairy tales, with the hope that they’ll be loved and shared – and never lost.

We’re also really interested to hear whether you know and treasure any forgotten fairy tales you wish we’d feature. Do tell me on Twitter or Facebook if so.

You may have noticed that we’ve snuck a couple of forgotten fairy tales in already: The Little Fir Tree by Hans Christian Andersen in Storytime Issue 15 was new to many of our readers; and few had heard of the fantastic Diamonds and Toads in Storytime Issue 18, even though it’s classic Brothers Grimm.

In Storytime Issue 23, we’ve got another relatively unknown tale, The Fantastic Fox from the Brothers Grimm and Andrew Lang (which also goes under the title The Golden Bird).

The story involves an undervalued young prince on a mission to win a golden bird, a golden horse and a beautiful princess – all with the help of an enchanted fox. It’s incredibly rich in detail and is filled to the brim with wonderful imagery. This forgotten fairy tale deserves as much attention as any of the better-known stories – and is ripe for the Disney treatment (though if they could they give the princess a little more sass, that would be great).

Our illustrations for this forgotten fairy tale, as you can see, are utterly stunning. That’s down to the amazing Alexandra Petracchi, who enjoyed putting her own spin on this fairy tale. I think the fact that the story had not been done-to-death by her has resulted in page after page of beautiful illustrations – each one fresh, vibrant and a real feast for the eyes. It must surely get tiresome for the illustration world to have to churn out the same fairy tales again and again? (Incidentally, Alexandra also gave us the exquisite Norse myth Freya’s Golden Necklace in Storytime Issue 10).

In future issues, you can look forward to many more forgotten fairy tales, including dragon kings, pig princes, glass princesses, enchanted swans, clever kids and quests galore. We can’t wait to publish them and very much hope you enjoy them. Coverage of forgotten fairy tales is long overdue and it’s high time that Cinderella and co budged over and made room for some new family favourites.

What do you think? Which forgotten fairy tales should we include? Let me know!

Here’s to trying something new!